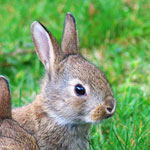 Their twitching button noses, their long ears and fluffy cotton tails make the rabbit a cute character. It’s a heart-lifting sight, watching them hop about fields and woods, darting in and out of hedgerows.

The wild rabbit is an important part of the food chain with many predators in the wild, such as foxes, owls and other birds of prey.

The rabbit is not native to the UK, a fact that surprises many people. It was introduced by the Normans in the 12th Century. Once hunted for its fur and meat, it has somewhat fallen out of favour in recent years.

But, there are a few problems with rabbits;

Rabbits have teeth that are continually growing and as such, they need to gnaw to keep them short. This means they gnaw at all kinds of things, from bark on trees to gate posts, crops and more.

The resulting damage is expensive to repair and part of the constant battle for landowners to keep their land safe. Being overrun with rabbits means expensive repair bills.

Rabbits are prolific breeders. They can breed, give birth to young and breed again all within a matter of weeks. This means that a few rabbits on your land will quickly swell to hundreds, possibly thousands of rabbits in the space of a few months.

There have been various attempts over the years to cull the rabbit completely from British soil. Thus far, all have failed including the introduction of myxomatosis, a disease that can be prevalent amongst rabbits.

That failed too. But landowners are, by law, duty bound to control rabbits on their land. This can take many forms, including the use on long term contracts with TAH Environmental to not only control the rabbit population on your land, but to also create and install effective rabbit proofing measures. These measures can include trap nets, rabbit proofed fencing, drop boxes and trapping.

We have many years of experience working with landowners and customers to control and manage the rabbit population.

We have worked with agricultural customers to ensure that their land has a controlled rabbit population, putting in place several measures to ensure damage is minimal.

We can offer night time surveillance and control with the use of night vision equipment as one of the many solutions to effecting controlling rabbits.

With NO call out fee and a comprehensive, no obligation quotation, call our team today to discuss one off rabbit treatments, long term control contracts and rabbit proofing measures.