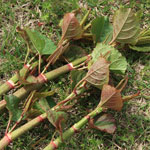 Our landscape has been greatly enriched by the flora and fauna that explorers and plant collectors brought back to Britain from their foreign travels centuries ago.

But several of these species of non-native plants have proved to be invasive, strangling native plants to near extinction.

Although not unpleasant to look at with bright red stems in autumn, and large, green leaves and white, tassel-like flowers in summer in summer, Japanese Knotweed is the thug of the plant world.

In spring and summer, its bamboo-like shoots grow to over 2 metres tall with large leaves, often measuring 14cm or more. They have large, creamy-white flowers that hang like tassels, produced in late summer and early autumn. The stems die back to ground level in winter.

It is not simply a case of digging up the plant and burning it. Rhizomes live in the soil and buy digging the soil over, the plant is being spread.

Japanese Knotweed must be controlled and a specialist team like TAH Environmental have the experience and the ability to deal with the plant, removing all traces from your property.

Introduced to the UK in 1839, Himalayan Balsam is related to the ‘Busy Lizzie’. With pretty pink flowers, it has taken up residence on river banks and waste sites where it has become problematic.

It is a tall weed, reaching well over head height and has a rapid habit of colonising a space. Thus, it smothers other plants and vegetation. It also makes river banks unstable, leading to collapse during heavy rain or raised water levels.

It spreads via seeding and is a fast-growing annual. Like Japanese Knotweed, it should be treated in Summer.

You are expected to control Himalayan Balsam on your property. At TAH Environmental, we have a specialist team who can control and/or remove the weed from your property. Depending on the scale of the problem, chemical treatment may be needed as well as removal of the plant itself.

For more information on invasive plant and our removal service, please call our team today.