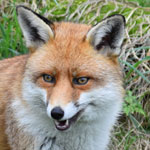 The fox is a mammal that is opportunist in nature. Elusive, the fox does not seek contact with humans and yet, it will take advantage of the opportunities we offer to it in the towns and cities.

Solitary in habit, the red fox mainly lives, hunts and sleeps alone, unless it has young. They are more active at night, their pointy faces and lithe frame a common sight darting across roads in towns and cities.

They are rarely a nuisance but there are some of their habits that can cause us distress;

What can TAH Environmental Do About Foxes?

Foxes, like all other animals, must be treated humanely. They cannot be hunted with dogs or be caused unnecessary suffering.

The urban fox will be attracted to areas where there is food. Simple preventative steps such as tight fitting bins lids on compost, waste and recycle bins etc. will deter the fox.

Foxes can only be trapped and euthanized, or shot. Clearly, a pest controller roaming the city or town streets at night with a rifle is not the best nor the safest solution.

Euthanizing any animal is expensive and not an expense many people are prepared to pay.

At TAH Environmental, we have worked with many homeowners, tenants and business customers to make the outside area of their properties less attractive and appealing to foxes.

We also work with landowners to ensure foxes are not causing damage to their land or property, ensuring that livestock such as chickens and ducks, are protected as much as possible with fencing.

We can offer night time surveillance and control with the use of night vision equipment as one of the many solutions to effecting controlling foxes.

For more help and advice on foxes, call our team today.